China is “creating facts on the ground” in the South China Sea, Vietnam’s Ambassador to the U.S. Nguyễn Quốc Cường told CNN’s Christiane Amanpour on Wednesday. 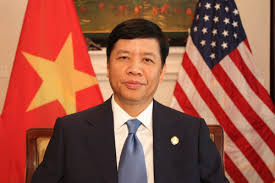 At question is an area of the South China Sea near the Paracel Islands; China this month installed an oil rig in an area both countries claim as their own.

This week a Chinese boat rammed and sunk a Vietnamese fishing boat near the oil rig; and in Vietnam, violent riots against the Chinese have forced Beijing to evacuate thousands of its workers.

“China is trying to turn [an] undisputed area into a disputed area. And that is unacceptable,” Nguyễn Quốc Cường said.

In an interview with Amanpour last week, Chinese Ambassador Cui Tiankai disputed one Vietnamese claim after another.

“We don’t want to see any conflicts in our neighborhood,” Ambassador Cui said. “But it will not entirely – it will not be entirely up to us, you see. Other people have to have the same constructive attitude and policy.”

“We have no other way but to respond peacefully but resolutely,” Nguyễn Quốc Cường told Amanpour.

As China grows increasingly powerful economically and militarily, it is flexing its muscle in territorial disputes – with Vietnam, but also with Japan and the Philippines.

The attitude was summed up well by China’s own then-foreign minister, Yang Jiechi, who in 2010 told his Singaporean counterpart, “China is a big country and other countries are small countries, and that’s just a fact,” according to the Washington Post.

“No country should underestimate the Vietnamese people’s determination to defend our sovereignty and sovereign rights.”